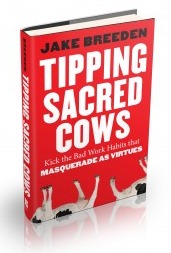 Teamwork, Innovation, Preparation and Fairness are some of the current workplace strategies for improving productivity in the office.  Although these are effective strategies, they require more than an “add water and stir” approach and in some cases they are down-right counter productive.

Leadership coach, Jake Breeden, looks at when workplace strategies work and when they backfire in his book Tipping Sacred Cows: Kick the Bad Work Habits that Masquerade as Virtues.   Ivana Taylor fitly describes the message of Tipping Sacred Cows when she says, “Anything taken to its extreme becomes its opposite.”

Get the book, but here’s a few quotables:

is when it works;

is when it backfires

Works when, “individuals with the courage to commit to their own work bring ideas to the table.”

It can backfire because, “Fish school together to protect themselves from predators.  Similarly, people seek safety in numbers to hide from the shark of accountability.  Collaboration fails when it becomes a habit.”

“Innovation doesn’t always mean reinventing the wheel.  It’s OK to draw inspiration from an existing idea. You can come up with original approaches to a plan without designing an entirely new template.”

“Creativity fails when workers are more focused on a return on ego than a return on investment.  It’s crucial to make sure you aren’t creating something new just because it feels good to do so.”

“Embrace the concept of onstage, rather than backstage, preparation.  Do your homework, but don’t be afraid to bring unpolished ideas to the table for input.”

“When done in secret, preparation is no good.  Change your mental model from ‘I prepare before the event and deliver during the event’ to ‘I’m in a constant state of preparation.'”

“Fairness becomes unfair when a manager stops giving her best employee the recognition she deserves in the name of being fair to others.  Fairness does not equal sameness.”