Are you a Giver, Taker or Matcher?

Do givers always turn out to be winners?

Who tends to do more giving and helping, men or women?

Is the current generation more selfish than other generations?

Why are people either Givers, Takers or Matchers?

I recently heard Dr. Adam Grant answer these questions on the Diane Rehm show. His new book is Give and Take: A Revolutionary Approach to Success.

Here is a five minute clip of Grant describing his research: 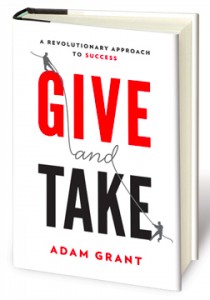 Want to know more?  You can listen to the Diane Rehm show here.  Pay attention to how many times Adam Grant gives credit to other people’s research.  HEADS UP: If you’ve never heard Diane Rehm, I should let you know that is her real voice.  Although she has a voice for silent film, she asks great questions and gets interesting people to the interview table.

Here are a few interview highlights:

1. We often evaluate people coming into an organization based on their talents and skills, but at the end of the day we value people more based on their helpfulness and contributions.

3. There are twice as many matchers as there are Takers and Givers in most cultures/industries.

4. Interestingly, Adam’s discovered that Givers are represented both at the bottom(failure) and top(success).  i.e. both the worst engineers and best engineers tend to be Givers.  The takers and matchers tend to all sit in the middle.

5. While some argue the current generation is more selfish and narcissistic than ever, there is great data that shows young-people are incredibly concerned about giving back and making a difference.

8. “Creating value for other people is the best way to win in the long run, even if being generous in the short-run involves some costs.” -David Hornick who blogs here.

9. Givers are not always too-nice.  Many of them are tough, but they have other’s best interest at heart.

10. Matchers often see the world as “what-goes-around-outta-come-around.”  They can often punish takers and plot the well-being of givers.

Join the Conversation: Can you judge yourself to be a Giver, Taker or Matcher, or is that a judgement only for those who know you? Leave a comment.