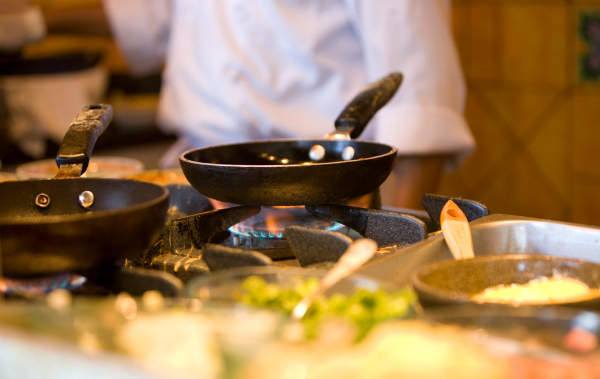 My kids love Food Network shows like Chopped, Iron Chef and Good Eats. Several times my wife and I have been roped into being judges for an at-home episode of Chopped. We have four kids (ages 16 to 9) and Chopped starts with four chefs, so it works.

It gets quite comical since we don’t have four kitchens. The flour is flying, wisks are turning and I usually narrate like Alton Brown on the side. A bit of warning, do not try this at home unless you are ready to do some serious clean-up.

If you’re thinking how hard it would be to “chop” one of your own kids, well it’s not after eating some of their culinary creations. Plus you get to compliment them before putting them on the “chopping block” with phrases like, “Your peanut butter pickles were robust in flavor, but I just felt they needed more cayenne pepper.”

From judging my kids “Good Eats” I’ve discovered 5 ways blogging is like a cooking show:

The magic is in the sharing not the doing.

It’s not enough for Alton Brown to display his culinary skills. Nobody is watching to be convinced that Alton CAN cook. We want to know HOW Alton cooks, and we don’t want any of the steps left out.

When I started blogging I wanted people to read my posts for their quality. I soon learned that people would not read to confirm the quality of my writing.

So to improve the usefulness of posts…

I like it when readers use my posts as a “how to” reference and not just a “drive by” read.

Cook a lot of dishes knowing viewers will only attempt a few.

Every time I write a popular blog post, I want the next post to be just as popular. But thats not realistic. Cooking shows know every recipe will not be equally in-demand. Viewers pick and choose the dishes that appeal to their tastes and interests.

Blogging requires serving up multiple posts (2x per week for me) and allowing readers to take their pick. The truth is you never really know which posts will go to the top of the menu and which ones will flop. The readers decide and they will always surprise you, so write with a “come and get it” mentality.

One successful entree does not mean repeat.

The #1 downloaded recipe from the first 180 episodes of “Rachel Ray” is Buffalo Chicken Chili. This dish still made the top 13 of in-demand recipes for 2013. But if Rachel tried to replicate this popular recipe on every episode how many viewers would keep tuning-in?

I learned the hard way not to fall into the trap of trying to replicate a popular blog post after one of my posts blew up on LinkedIn. For days after my one-hit-wonder I battled writers-block as I tried to write in the shadow of a successful post. Eventually I released another post that – sure enough – didn’t do as well.

Thankfully, I came across this article by Jeff Goins in which he talks about one of his posts going viral and getting 1 MILLION visitors. Jeff shared some words that helped me:

I try to normalize around those words each time I experience post-erratic success syndrome.

Your personality is just as important as the recipe.

Whether its the straight-laced wit of Mark Dacoscos (Iron Chef America) or Duff and the eccentric crew on Ace of Cakes, successful cooking shows marry great recipes with magnetic personalities.

While good blogging contains useful information and helpful “how-to’s”, you cannot blog with the disconnected feel of a technical writer. You don’t have to be like the Muppet’s Swedish Chef – all personality, no recipe – but you have to bring a humanness to your writing.

Liz Ryan talks a lot about loosing the zombie-like speak and using your “human voice.” In this article Liz points out how we would think differently If Famous People Branded Themselves Like We Do.

I am still working on perfecting the art of a good title. It’s strange but I usually write a post around an original thought or a plausible title. In a previous post I share how I capture those spontaneous thoughts and titles.

Your post titles don’t have to play on words like Alton’s, but they should grab readers by the eyeballs and suck them into your message. If they don’t then even the best writing will go unread, and your blog will end up “Chopped.”