Last night PBS aired an episode of FRONTLINE entitled “Generation Like”. The program explores the relationship between teens, social media and corporate marketing.

There is an unprecedented relationship developing between teens and the companies that market to them. Social media is allowing teens to directly connect with brands and celebrities. Watch this 30 second preview.

A powerful line from the full-episode: “This is the biggest transformation of communication in our lifetime. To stand on the side lines is not an option.”

Many families are struggling with social media confusion because parents are standing on the side-lines unsure of what to do.

Here are a few things to understand about teens and social media:

If you’ve ever chaperoned teens on a trip, then you know what its like to become invisible. In those invisible moments teens forget you are present and you overhear things like “I am going to ask her out… ” “I want to move to…” “I would so, go out with…” Chances are if you stopped the van right then and gave teens the chance to do what they just said, you wouldn’t have any takers. It was wish-talk.

A lot of social media expression amongst teens is harmless wish-talk. They are exploring their thoughts in a social space. And I’ve learned you can’t take the social out of social media.

Unlike the days when confining a teen geographically (at home) meant limiting them socially, social media has made geography a mute point. And that’s not going to change. So don’t fight the social element, talk about it.

Engaging is more effective than enforcing

A big mistake parents make is to only enforce their social media rules. That’s like telling your teen he or she is not allowed to like someone else.

Maybe you’ve been there where your worst fears take over because your teen’s heart has been captivated by some “looser.” If so, then you know it takes more than rules-enforcement to guide the heart. It takes interaction and conversation.

Parents have to learn how to engage their teens over social media. This involves interacting with social media platforms so that tweeting, hashtaging and snapchating don’t sound like other languages.

Want more help for families with social media confusion? The iFAm seminar teaches parents and teens how to make social media LIKE-able in the home. 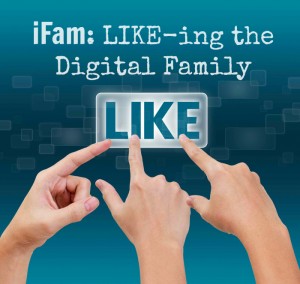