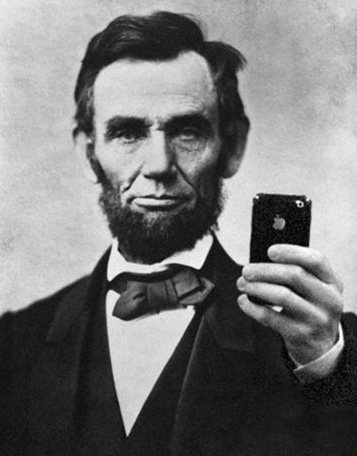 When I watched the movie Lincoln I wondered how do we know what we know about his decision making, his mannerisms, his relationship with his wife?

All of which was ravenously collected in the shadow of Lincoln’s assassination. It seems that every minuscule data point of Lincoln’s life was snatched up and preserved by someone.

In the future, you won’t have to be famous or die an infamous death for researchers to have enormous amounts of data about your life.

Emails, texts, tweets, posts, pins, pics are all adding up to create your “digital inheritance.”

Which creates a question, if someone wanted to know more about you, what would your current digital inheritance tell them?

Would people think you made a living posting pictures of meals and saying things out loud that were better left unsaid? Ouch!

What is the overall picture of your social media profile?

Don’t just think about what’s on your current social media accounts. Think about past accounts.

As recent as six years ago Myspace was the dominant social media platform. It was only 2008 when Facebook users first outnumbered fans of Myspace. Remember Everybodys Connected and Friendster, Ugh!

If you were ever on these platforms and didn’t delete your account, then your content is still out there in the big card-catalogue of the internet. All for the searching.

You can hear an amusing piece by Taylor Quimby on Deleting Myspace, the velvet leisure suit of social media. Apparently, if you have forgotten your username and password there is still hope of removing those old pics.

I recently heard a researcher point out that the problem with so much data on the modern person is it will be easy for biographers to hyper-focus on one email or tweet. I’m sure future historians will have to practice portraying people in the full context of their life and not selected selfies, but ultimately it is the responsibility of the user to manage their digital image. Especially if you posted a pic of yourself in a leisure suit. DELETE IT!